Had an awesome time at the Wings and Wildflower festival the last few days. Met lots of great people, had a blast giving some talks, and I just realized now that I even got a life bird out of it all! If you didn't GOYB and join us this weekend, here's what you missed! 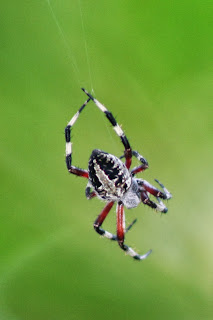 David and I led a walk though the trail at Hickory Point Park. There were a ton of insanely cool spiders out there, including this little gal, I think she is an orchard orb weaver but need to verify the ID. 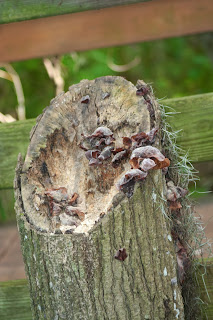 This is just an artsy picture of a stump but I thought it was cool. 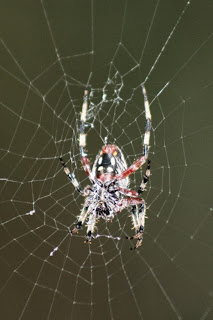 A shot of the orchard orb weaver's tummy. 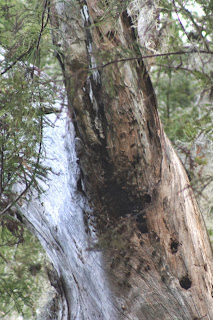 On this walk, I decided it would be better to not mess with the bees. They were at the top of a tall tree, so that made it much easier for me. (In case you can't tell, the darkness beside the silver is a bee hive in the trunk of the tree.) 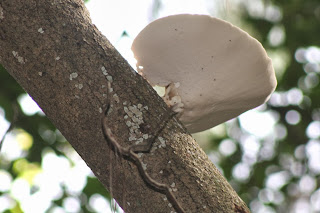 This is a cool shelf fungus.
This was a life bird for me - a yellow throated warbler. I've certainly seen them before but I guess I always assumed I already had a picture of one. So this is 286 for me on my photographic life list. 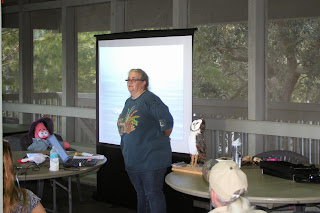 This is me, starting my "Profoundly Unscientific Birding Identification" talk. Other than Patrick and the burrowing owl puppet, I made all the props, including Barney the barn owl, and a bunch of puppet type things that are laying beside me. 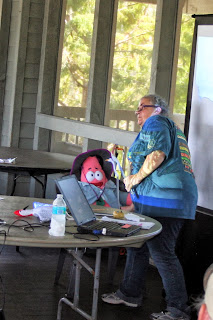 Abusing poor Patrick in the name of education. I am poking him in the eye with a great egret puppet to demonstrate how they have straight pointy beaks. As opposed to the ibis, who has a curved beak and therefore would have to stand on Patrick's head and bend over if he wanted to poke Patrick's eye (which I also demonstrate.) 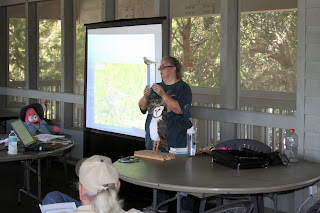 One of my two Bill Meyer stories, I am demonstrating here how he taught me to identify palm warblers by the way they pump their tail up and down.


It was an awesome festival, met so many terrific people. Already looking forward to next year's!

In the coming months, I'll be working the Space Coast festival and leading a bird walk for a women in the wilderness meeting. Make sure you watch my schedule here and come on out for some fun. Remember, you can look at stuff on the internet or TV, but you can't really experience it unless you GOYB and join me!
Posted by deederange at 7:47 PM No comments: Links to this post

Video from Hands Across the Lagoon

We had a great time out at the Hands Across the Lagoon Event. Here's the video that I made for it:

Posted by deederange at 11:13 AM No comments: Links to this post

Event Update: Goodwin Wildlife Management Area: The Good, The Bad, and The Owie

The bad: I had a bad start to the trip. I was trying to top off my bike tires with air, and wound up spending $3.00 in quarters, and I accidentally let all the air out of my tires. I finally had to admit I didn't know what I was doing and I had to ask a little boy to fill my tires up for me. Duoh!! And even worse - don't tell David this - but once I got to Goodwin I realized that I had forgotten my binoculars. There is a reason I'm known as a very bad birder!

The owie: Once I finally got out to the park, I met up with Christy and we started off for a great ride, but then at the 3 mile mark, we stopped off at the tower to look out. The tower was a bit over grown, but we ascended with no problem. Coming down however, I accidentally ticked off some bees and they attacked us. Christy got out unscathed, and for all the cussing I did, I got out of it with only 2 stings. Unfortunately, one was on my knee, and I had still had to ride back 3 miles!

Here are the official pictures from the trip: 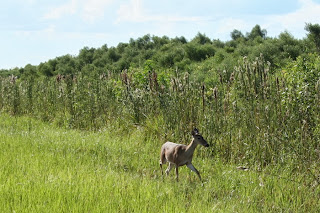 This is a deer that just stood right beside us while I futzed with the camera. It was a little strange - I took this with the short lens. The deer was not afraid of us at all and just stood there watching us. 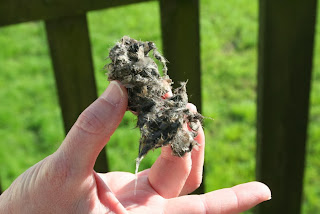 This was a cool owl pellet that Christy found on top of the tower. 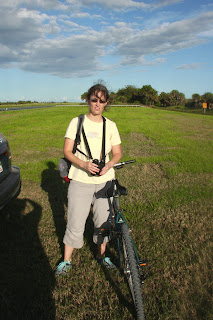 This is Christy at the end of the bike ride.


Overall, the good far outweighed the bad, and any day outside birding with friends is always better than one stuck inside! Keep watching the web site and come out and join us for an outing soon!
Posted by deederange at 7:05 PM No comments: Links to this post