Since I started this blog, one of the questions I get asked the most is, "What motivates you?" There are a few answers to that. People are a big motivator (I'm looking at you David, Heather, Alison, Hiawassee Mom, Joy, Amy, all the way back Wayne on Mount Monadnock who started this whole thing) and I would not have come as far as I have in the last few years without them. But the one thing that has always been with me, literally every waking minute of my day is music. It is what gets me up in the morning, gets me through my work outs, and gets me though the times that I alone.

Back in 1995 after my divorce, I was pretty down. I listened to a lot of music and read a lot of philosophy. One thing that stayed with me was from the Tao, there is a part about learning to be like water and go around the rocks instead of just crashing into them. I needed a reminder of this point, which is the explanation for my first tattoo on my left wrist.

At the time I got that tattoo, I knew I wanted a second one on my right wrist. My initial thought was the chinese character for "Silence" as at the time I was convinced I talk way too much. A few years removed from the divorce, I realized that that was pretty negative, I am chatty, that's just the way I am, most people think it's actually one of my better points and I came to appreciate it. But I still wanted a tattoo, but was back to being undecided what I wanted.

I started this blog in 2009. I was a big turning point for me, it was about self acceptance. On New Year's Eve 2009, I was wondering if the blog was a bad idea, had doubts if anyone would ever want to go out and do stuff, didn't really know if I could make any kind of difference or impact.  I was feeling kind of bored and lonely and started goofing off on YouTube. I happened to stumble across one of my favorite videos of all time, The Smashing Pumpkin's Tonight, Tonight:

A line from the song jumped out at me:

"Believe that life can change, that you're not stuck in vain"

A few things dawned on me at that moment:


When I made my new year goals that day, I put "Get new tattoo" on the list. I didn't do it. I put it on my list again in 2010. Didn't do it again.
A few weeks ago, during an SOS walk, I was whining to Heather about being down, and she basically kicked my butt and told me stop whining and GOYB (man, I HATE it when people throw my own words back at me:-). So, I came home from the walk, and took a day off of work to regroup myself. On that day, I went back and revisited my new years goals - I bought new sneakers, I signed up for banjo lessons, and I researched tattoo artists in the area. Since that day I have: 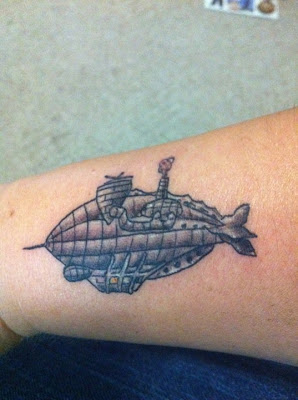 In case you couldn't watch the video, this is the dirigible that they ride to the moon. And in case you are not familiar with my warped sense of humor, the yellow in the window at the bottom is Spongebob Squarepants.
Life feels new and good again.
Join us for the SOS walk tomorrow evening.  But beware, you will have to look at my tattoo over and over and over. :-)
Posted by deederange at 5:55 PM No comments: Links to this post

It was a very interesting walk tonight. We saw a tree with some tape around it. Weren't sure why until we heard this deafening noise. Here's what we saw and HEARD!

Trust me when I say, our walks are not usually this scary!
Posted by deederange at 6:06 PM No comments: Links to this post

So, the last time we did and SOS, I got severely dehydrated and felt awful for days after. So, this week, I took all kinds of precautions. My trainer told me about this electrolyte stuff you can get that doesn't have all the calories of gatorade or even G2, so I tried a packet of that. It tasted like vaguely cherry flavored spit, but  it really seemed to help (I drank 6 oz of that on my way to the water). I also got myself a fancy 70 oz Camel Back. That was awesome. Absolutely worth the $50, it was so nice not to have to carry multiple water bottles, and it also had pockets for my cellphone and keys, and the best part is that it is insulated, which meant that my water was still cold when I finished it at the end of the walk!

Speaking of the walk, if you didn't GOYB today, you missed some wicked cool stuff! Here's what we saw today: 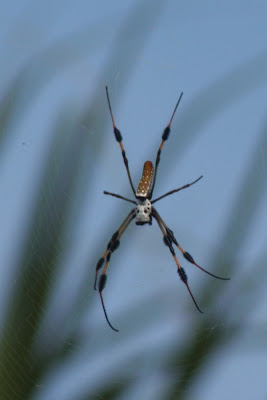 I haven't seen one of these in a while! It was a very pretty golden orb weaver. He was way up on the power line. 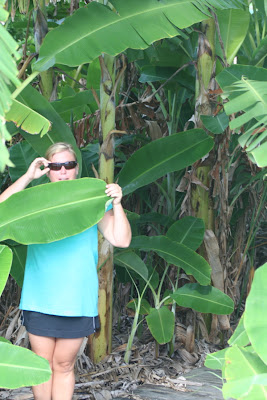 Heather decided that she needed her picture taken in a banana jungle. I concur it was quite picturesque. 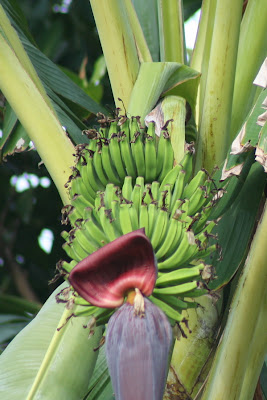 A banana bloom with lots of bananas. 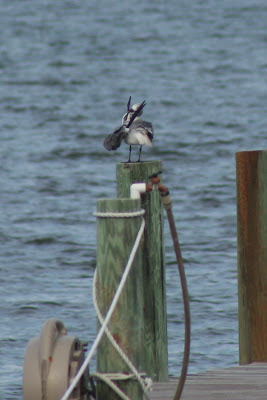 I'm not sure what this was. I thought at first maybe a Forester's tern as it had black eyes, but he just wasn't pointy enough. Perhaps a laughing gull in between plumages? 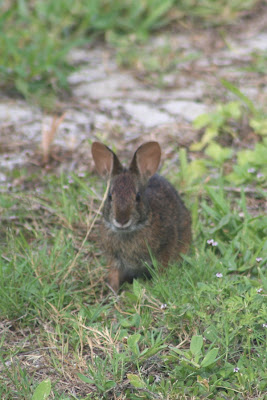 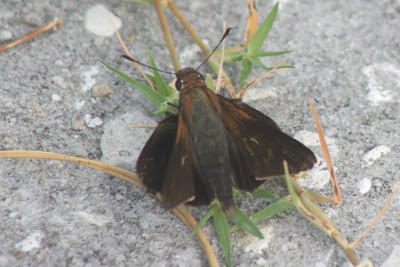 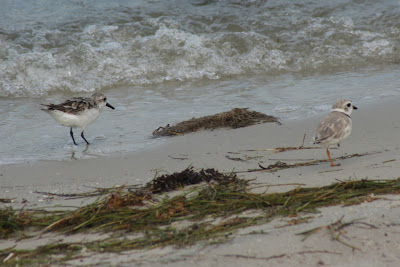 I should know, but admit I have no idea what the heck these 2 birds were. 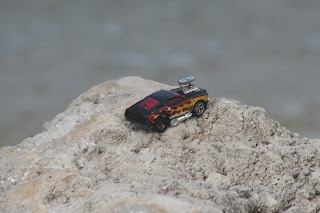 This was a first for us. Apparently one of the crabs got itself a fancy set of wheels! Or maybe it was just a toy car that a kid left on the rock. I prefer to picture a crab cruising around in it. 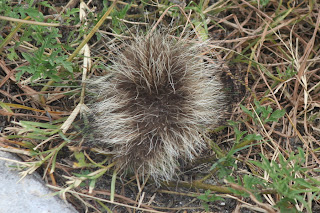 This was another oddity today. It was a chunk of bobcat fur. There was no other evidence that the cat had been hit by a car or predated, so maybe something almost, but not quite got him. 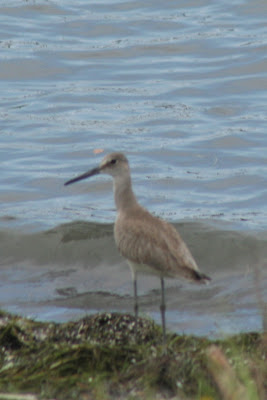 I was trying to get a good picture of this willet when something bizarre swam by... 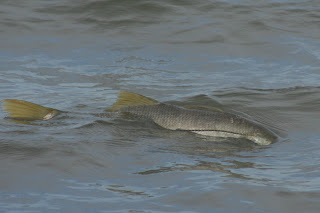 This was by far one of the oddest things we've ever seen. It's a Snook swimming on top of the water. He didn't just come up once for air, he was swimming like this all the way up the river! Really weird. 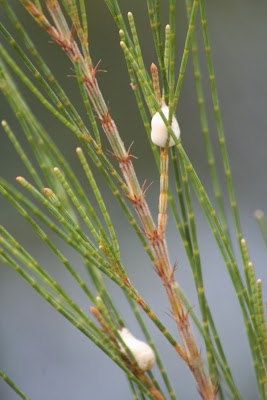 Neither Heather nor I know what the heck this is, but the white stuff was on an Australian Pine. I am thinking that maybe the pine tree had a sinus issue and it's tree snot. But that was just my guess.


Now I ask you, while you were sitting on your couch today, did you see a Snook* swimming on top of the water, or did you see pine tree snot? I think not! GOYB and join us Tuesday for our next walk on the river!


* And for those of you who actually watch it, no, Snooki on the Jersey Shore does NOT count!
Posted by deederange at 1:35 PM No comments: Links to this post