After hearing reports of not one but TWO Vermillion Flycatchers at the Orlando Wetlands, I decided to organize a road trip. This was one of my favorite haunts back when I lived in Rockledge, and was really excited to get back there. I was joined by Heather and William, and we had a great time. If you didn't GOYB, here is the amazing stuff you missed (you will have to click to enlarge to see some of the cooler stuff): 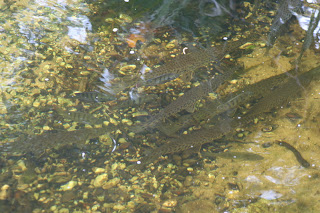 We got separated from William early on in the walk due to me being a goofball and grabbing the wrong camera lens. Heather and I went back to my car to get it, and on the way back to meet up with William, we went over a bridge that had a whole herd of Gar crossing under it. 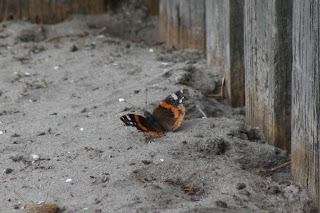 We saw lots of butterflies. I don't recall this guy's name. 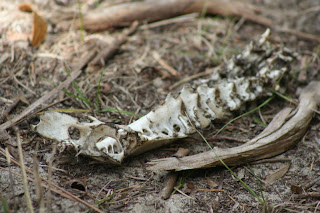 We came across this weird area that had lots and lots of very clean, white bones from many different critters. Vultures are not known for carrying their carrion, David theorized that a human, for whatever reason, has been dumping dead critters back here for the vultures. There were bones from at least a few species of birds and a turtle, as well as a LOT of vulture poop and feathers. Really weird, I felt like we had stumbled onto some weird Gary Larson-esque vulture take out place (remember his Carrion Carry-out joke?) 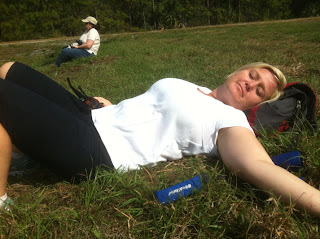 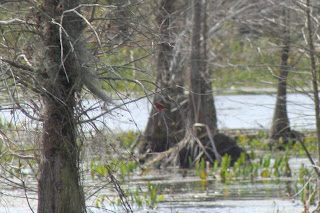 This is Heather taking a nap while we waited for the Vermillion Flycatcher. He had been in and out of the trees in this area, so we sat and waited a while for him to come back.

At last! That little tiny red and black spec in the center of the picture is our Vermillion Flycatcher! I was very excited to finally get a picture of him. I saw one in the Everglades before David and I were married, but did not get a picture at that time. 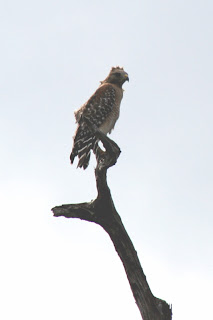 This was a hawk who had either just had a romantic encounter or a scuffle. At any rate, his hair was all messed up and it made me laugh. 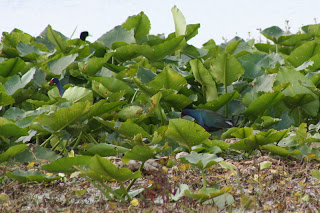 At this point, anything we got was just a bonus, but still, it's always a thrill to get the elusive Purple Galinule. I didn't realize when I took this picture, but there were two of them in there. 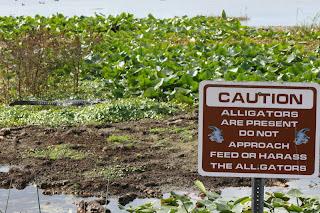 Heather and I thought this was amusing. There was a little tiny aligator right behind the warning sign. 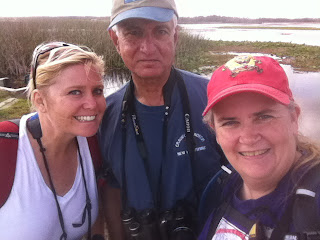 Heather, William and me near where we got the Vermillion Flycatcher. 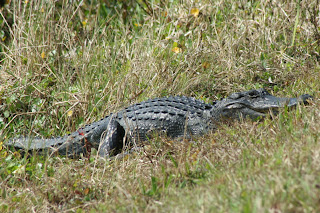 We saw a zillion little tiny alligators today. It was weird after seeing the HUGE ones at Goodwin just a few weeks ago, seeing little tiny ones today. I don't think we saw any over six feet. This was my favorite one of the day cause he looked like he was smiling. 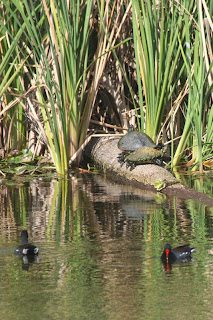 This is two turtles and a couple of common Galinules. 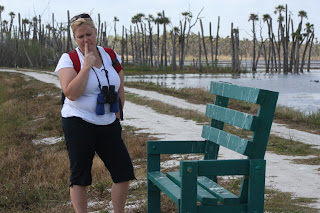 Heather trying to decide if she wants to sit on this bench, that was apparently used by birds after a large meal. She decided against. 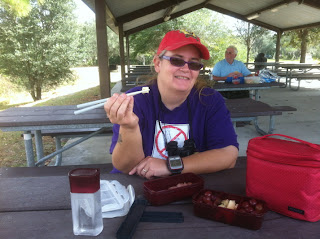 Me, eating lunch out of my very cool bento box given to me by Joy. I'm not good with chopsticks and had to employ the 5-second rule many times. But it was a long walk and I was hungry!

It was a great walk at one of my favorite places on earth. Remember, you can look at a picture of a Vermillion Flycatcher in a book or online, but you can only walk 6 miles with great friends, in fantastic weather, and see tons of other stuff too if your GOYB! Hope to see you on future walks!
Posted by deederange at 9:29 PM