It's been a while since I last updated. In the past month I have done a few unofficial, unscheduled events. Hiked in GA with family, attended the Vero Christmas parade (see pictures below). But in general, have been slowed down a bit with !#!@#!@#! plantar fasciitis. So very annoying. I've had cortisone, PT, stretches, night brace, day strap. As a last ditch effort before surgery I am now in a boot until the end of December. This has put somewhat of a damper on my walking goal. Despite the valiant effort, I don't think we will make our goal of 1000 miles for the year.

But next year, oh yes, next year... I think maybe we should set something slightly more realistic - 750?  We will see. I am proud of the fact that we easily sailed past last year's goal of 500. I've been in the boot for 2 weeks now, and my walking was pretty hampered long before that, so I think were I healthy,  we would have sailed (or strolled) past 1000 as well.

Anyway, I plan to resume events as soon as I get this stupid boot off. In the mean time, I will still be participating in the annual bird counts, although mostly as a passenger in a car, not walking. If anyone wants to help out in any way with the bird counts or post-count potluck, let me know!

In the mean time, here are a few pictures from the Vero Beach Christmas parade: 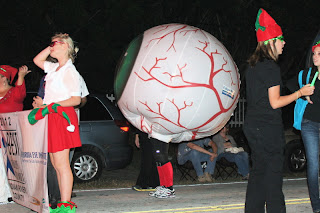 I just don't remember stuff like this in the parades back home. This was a giant bloodshot eyeball. In the Christmas parade with elves. 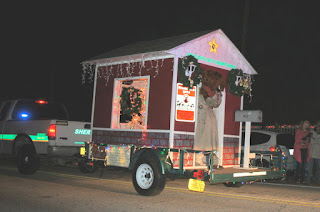 This is MacGruff the crime dog's little house. That is him waving from the back. I felt safe knowing he was on the job.